byAnthony
You are here:
< All Topics

An endangered species found in the deep-sea hydrothermal-vents (about 1.5 to 2 miles below the sea).

It is the only still-living creature to incorporate iron sulfide into its shell (and sclerites!). In 2019, it was declared endangered on the IUCN Red List due to deep-sea mining of its habitat for metal ores. This snail is very vulnerable as it is known only from 3 hydrothermal vents in the Indian Ocean, comprising a mere 0.0077 sq mile of habitat.

Chrysomallon squamiferum, commonly known as the scaly-foot gastropod, scaly-foot snail, or sea pangolin[3], is a species of deep-sea hydrothermal-vent snail, a marine gastropod mollusc in the family Peltospiridae.[2] This vent-endemic gastropod is known only from deep-sea hydrothermal vents in the Indian Ocean, where it has been found at depths of about 2,400–2,900 m (1.5–1.8 mi). Chrysomallon squamiferum differs greatly from other deep-sea gastropods, even the closely related neomphalines.[4] In 2019, it was declared endangered on the IUCN Red List[5], the first species to be listed as such due to risks from deep-sea mining of its vent habitat that also produce high-quality metal ores[6].

The shell is of a unique construction, with three layers; the outer layer consists of iron sulfides, the middle layer is equivalent to the organic periostracum found in other gastropods, and the innermost layer is made of aragonite. The foot is also unusual, being armored at the sides with iron-mineralised sclerites.

The snail’s oesophageal gland houses symbiotic gammaproteobacteria from which the snail appears to obtain its nourishment. This species is considered to be one of the most peculiar deep-sea hydrothermal-vent gastropods, and it is the only known extant animal that incorporates iron sulfide into its skeleton (into both its sclerites and into its shell as an exoskeleton).[2] Its heart is, proportionately speaking, unusually large for any animal: the heart comprises approximately 4% of its body volume.[4]

This species was first discovered in April 2001, and has been referred to as the “scaly-foot” gastropod since 2001.[7] In terms of its scientific name, it has been referred as Chrysomallon squamiferum since 2003, but it was not formally described in the sense of the International Code of Zoological Nomenclature until Chen et al. named it in 2015.[2][8] Type specimens are stored in the Natural History Museum, London.[2] During the time when the name was not yet formalized, an incorrect spelling variant was “Crysomallon squamiferum“.[2]

C. squamiferum is the type species and the sole species within the genus Chrysomallon.[2] The generic name Chrysomallon is from the Ancient Greek language, and means “golden haired”, because pyrite (a compound occurring in its shell) is golden in color.[2] The specific name squamiferum is from the Latin language and means “scale-bearing”, because of its sclerites.[2] At first it was not known to which family this species belonged.[7] Warén et al. classified this species in the family Peltospiridae, within the Neomphalina in 2003.[9] Molecular analyses based on sequences of cytochrome-c oxidase I (COI) genes confirmed the placement of this species within the Peltospiridae.[2][10] Morphotypes from two localities are dark; a morphotype from a third locality is white (see next section for explanation of localities).[2][11][12] These different colored snails appear to be simply “varieties” of the same species, according to the results of genetic analysis.[2] 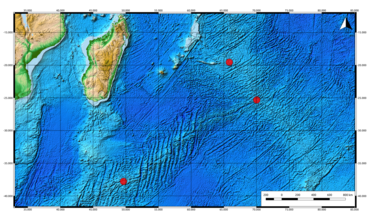 Distribution map of the scaly-foot gastropod

Peltospiridae snails are mainly known to live in Eastern Pacific vent fields. Nakamura et al. hypothetized that the occurrence of scaly-foot gastropods in the Indian Ocean suggests a relationship of the hydrothermal vent faunas between these two areas.[13] Research expeditions have included:

What is Generosity publishing?